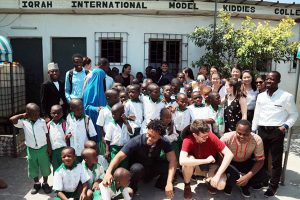 Technology makes it all possible. You want to teach 1 Million teachers? Technology can help you.

The 1 Million Teachers (1MT) program was founded by Hakeem Subair, an alumnus of the Smith School of Business and is in partnership with The Faculty of Education at Queen’s University. The idea originally came about while the Subair family was looking for a school to enroll their daughter in in Nigeria. Disheartened by what was available to them, Hakeem and his wife Olajumoke opened their own day-care facility which later became a school. The school was quite successful, but the lack of educators in Nigeria made retaining teaching staff difficult. Subair identified the lack of incentives encouraging people to become teachers as a major barrier—they weren’t paid much—and he resolved to do something to fix it. The Subair family eventually immigrated to Canada in 2012, but the state of Nigerian education remained a concern for them. Initially, Subair made videos tied to Nigerian curriculum outcomes that students themselves could use to learn material. However, at the urging of Queen’s professor Tina Dacin, Subair decided to aid in the creation of a larger teaching talent pool rather than making educators obsolete, and so 1 Million Teachers was born.

The 1 Million Teachers program is novel in that it’s a reward-based phone application – a person is given incentives as they progress through the training, and unlock new levels that correspond to the 11 coloured belts earned in Karate. Once a person becomes a “black belt” a host of benefits are triggered, including cash payouts, invitations to 1MT events and programs, and an opportunity to take part in an intensive teacher education boot camp taught by Queen’s professors, 1MT faculty, and 1MT senior black belts. 1MT not only prioritises training new teachers, but teacher retention as well – key in their business model is providing continual professional development and leadership opportunities for those that have already matriculated through the program. They can also supplement their income in becoming part of the 1MT team, which will in turn allow the program to be sustainable.

The project was started in Nigeria, but aims to include more of Sub-Saharan Africa as time goes on. As the name of his program would suggest, Subair aims to train 1 million teachers in a year.

To find out more about this project, visit the 1 Million Teachers website, and read additional articles from the Queen’s Gazette and the Global Citizen.